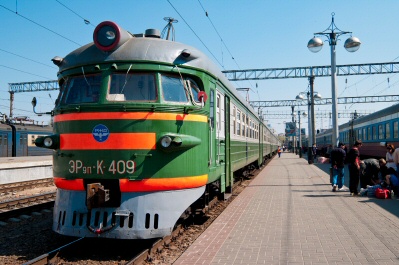 It is the greatest rail journey on the planet. Stretching almost 6,000 miles from Moscow to Vladivostok, the very name of this engineering marvel evokes images of exotic, adventurous, travel. As a leg of an around-the-world trip, I took the Trans-Siberian during the summer of 1994. Here I present my trip, as a guide for those who may follow, and entertainment for those who can't. Happy travels!

In the image above, a train prepares to leave Yaroslavl Station, 250 km (160 miles) north east of Moscow. This city sealed it's place in history when it was de facto capital of Russia for two months, as Minin and Pozharsky made it their base of as they marched to the relief of Moscow in 1612.

The Trans-Siberian railway was so crucial to Russian security that control of the railroad meant control Russia. Much of the Russian Civil War of 1917-1920 was fought for control of key portions of the Railroad.

Before the Trans-Siberian Railway was built the quickest way to travel between the Russian cities of St Petersburg and Vladivostok was by crossing the Atlantic, travelling by land across North America and then going across the Pacific Ocean.

Running for the most part straight across the country, there was a large kink built into the original Trans-Siberian Railway. As he drew up the plans for the railroad the dictatorial Tsar of Russia accidentally traced a small nick in his ruler as he drew a line across his nation. The timid planners built the track exactly as it was drawn, too terrified to point out the Tsar's error.